I’d love to hear your story if you actively practiced swearing as a kid. Because that was me, too. In grade school, I was teased for not swearing. So I worked on it. Turns out, that was the right direction; there are studies now not only showing benefits of swearing, but also dismissing the notion that it’s the default of people with poor vocabularies or little imagination. (In  my experience there is some very creative swearing out in the wide world!!)

In terms of Ordinary Overcoming, I’m curious if any of you have had a struggle with swearing—or not swearing. Today I was reminded of mine (I’ll say ‘how’ in a minute)  and inspired to share. So here goes: 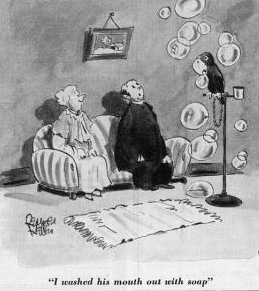 I must have been about 8 or 9. At the time I only had 4 siblings old enough to talk and not one of us used swear words in my parents’ presence. No way. I still remember the taste of Dial soap. (It was a different era remember; it was a rare event in our house and now, thankfully, washing kids’ mouths out for swearing has gone out of common practice.) But for me, when I was old enough to actually know what I was saying, what stopped me was more than memories of suds on my tongue, it was more about being way too visual. I would picture what someone was calling me or … suggesting I do.

Then I discovered at school the other kids had noticed my missing potty mouth. I wasn’t wincing or whining about them doing it. I just wasn’t taking part. And I didn’t get bullied about it; I just heard pointed comments like, “Oh, don’t say that in front of Cathy, (snotty voice) she doesn’t swear.”  I’d never noticed the difference till then. So, as much as those mental images plagued me, I figured swearing must be the normal thing to do. I should learn how.

The first chance arose when I happened to come home from school and found everyone outside or next door or wherever—the house was empty. No one could hear me. I chose a 4-letter word, not sure which. Summoned up the nerve. And said it aloud. In a whisper. I tried again. I couldn’t actually say it at normal volume. Memories of Dial? (Bravery is a theme in this blog, right?) Regardless, it took a few ‘under-my-breath’ practice sessions before I broke my internal resistance to swear words. Then, one slipped out.

Rough-housing with 2 or 3 of my brothers, or similarly getting bratty with each other, I said the worst one—the euphemism of which used to be: ‘firetruck.’ Everyone froze. The room went silent. I ran to the dining room and hid behind the tall dish cabinet. For what felt like the rest of the day.

I was horrified with myself. When I finally crept out, I was blown away to learn I hadn’t been turned in. I think my brothers were shell-shocked. That early experiment wasn’t very successful, though. The visual images were too much to get past. And it’d get worse as we all got older and my classmates caught up with my sister in terms of creativity in their language use. I’ll always remember a girl I met on a camping trip because of a word I first heard her use, but I can’t even allude to the word.

It might be worse if I was in grammar school now; according to a 2013 study by Timothy Jay and Kristin Jay, by the time children entered school (around the age of five), they had a “fairly elaborate (42-word) taboo vocabulary.” Myths about children and swearing.

My non-swearing carried on through high-school and college, with at least one memorable exception. My boyfriend throughout most of my college years was making his angry point/telling me off with what he clearly intended to be a one-way exchange. Cowed as I was at that moment, something snapped. At long last. When he’d finished his tirade and turned to self-righteously march from my room, I swore. One hard, cold statement—the phrase my father always toned down to: “Dad gum it!”  But I didn’t tone it down. My boyfriend stopped in his tracks. He was cowed and he went silent. (Even in that tense moment I remember recognizing an ‘aha! Eureka’ feeling: so that’s what swearing can do.) He came back and sat down while I proceeded finally to stand up for myself.

That incident, and others, taught me: used judiciously, swearing can be quite effective. The studies I mentioned earlier not only found this seems to be true …

“Swearing appears to be a feature of language that an articulate speaker can use
in order to communicate with maximum effectiveness.”

… but they also indicated other fascinating benefits and conclusions. Here are just a couple highlights I snipped (with spelling differences intact) from a press release by Dr. Richard Stephens from Keele University:

So!! I have another reason to be grateful for having lived so long in New Zealand where, it seems to me, swear words swarm through many a conversation like gnats at a streetlamp. Most phrases are attributed to England (look at Buzzwords 2015 on 49 British Swearwords, defined).

I vividly recall first hearing ‘bloody’ used as a swear word, several months before arriving in New Zealand, where it’s quite popular. Traveling on a decrepit bus heading from Darjeeling, India to Kathmandu, Nepal, a hardened, skinny English guy was griping bitterly about not being able to get “a bloody apple crumble.” (Why would you WANT to?? My stomach turns even writing this.)

It was the ordinariness, the constant and varied exposure in New Zealand, that gradually got me past my earlier aversion. I’m glad of it, really. Though, as this post suggests, I still don’t swear much. But now Kyle Carson, one of my lead characters in My View of the Bright Moon, who personally has no aversion whatsoever to swearing, can go right ahead. I won’t stop him. Whereas years ago, I’d have really struggled to give him the F-bombs he occasionally drops into the novel. He’s clearly expressing his emotions.

In closing, here’s the prompt behind this post; I found it as an attachment to an old email. The story has done the rounds on the internet. (Please don’t take this to mean I condone child-hitting of any sort, I emphatically do not.)

A 6 year old and a 4 year old are raking the yard.

The 6 year old asks, “You know what? I think it’s about time we started learning to cuss.”  The 4 year old nods his head in approval.

The 4 year old agrees with enthusiasm.

When the mother walks into the kitchen and asks the 6 year old what he wants for breakfast, he replies,

He flies out of his chair, tumbles across the kitchen floor, gets up, and runs upstairs crying his eyes out, with his mother in hot pursuit, slapping his rear with every step. His mom locks him in his room and shouts, “You can stay there until I let you out!”

She then comes back downstairs, looks at the 4 year old and asks with a stern voice, “And what do YOU want for breakfast, young man?”

“I don’t know,” he blubbers, “but you can bet your ass it won’t be Cheerios!”