I took my first solo overseas trip at age 25, visiting France and Switzerland for a week each. When my travel companion chickened out (her words!) late in the trip planning stage, my wanderlust burnt through the “OMG the trip’s off?” moments of deep disappointment. From the ashes, an idea arose: “OMG, go alone?” An acquaintance at work enthused and encouraged, “You’ll love it! You won’t be alone; you’ll meet all sorts of people. Just be prepared, once the travel bug bites, you’ll be infected for life.” Other acquaintances offered horror stories of white slavery, public robberies, you name it. These privately got my goat big time: sharing fear, spreading doubt. Not with malice, I knew that, and not with the intention of bursting bubbles or tainting dreams, but that would have been the result, if I’d listened. I didn’t. Nor did I listen to the many co-workers who called me brave to go alone. I didn’t feel brave. Just determined to live that photograph I’d attached to my soul, the one that stopped me on a lazy Sunday as I drooled over a travel magazine and wrung a promise from me to me: to get to Porquerolles Island to walk that sun dappled path of sand and pine needles 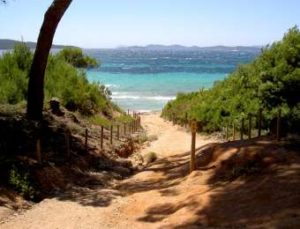 and come out onto that sparkling blue beach. That I did.

It was lonely at times, but hostels are friendly places and I had the compilation tape in my Sony Walkman (okay, it was some years ago now) with upbeat songs and well wishes from co-workers. After the farewell party they threw (sweet and goofy, right? I was leaving for 2 weeks!), marking this as a milestone for me, I was off. And my co-worker was right … The travel bug bit big time. Traveling only grew as a passion, rather than subside—almost an addiction. Four years later, after saving half of every paycheck for over a year, I set off alone again, with a one way ticket to South Korea. The thirteen months that followed provided more than a few moments for overcoming (which I’ll share in upcoming posts) and, in fact, changed the course of my life. I learned later that all my friends, and most co-workers, took bets on whether I’d return or not and that two credited me with motivating them to move into new careers.

[youtube=https://youtu.be/QUQsqBqxoR4&align=right&w=320&h=240]Which all felt very odd to me (and believe me feels odd to share here), because solo travel didn’t feel brave. Driven by a passion for new places and experiences, it felt more like a requirement than a considered choice. For me, a poolside moment during summer school when I was eighteen or nineteen stands out as ‘brave.’ And it wasn’t because I pulled someone from the deep end or saved a child choking on candy.

I spoke up for my air mattress. The air mattress floating in the corner and briefly unoccupied for some reason (maybe I’d run to the bathroom or to buy a cold drink) but which I’d been floating on (carefully) with a book for over an hour. I don’t recall whether it actually was mine or one I’d commandeered from the university pool, but a bond and a sense of ownership had formed.  When a stranger started to paddle off with it, victim mode settled around me and I stared sadly, silently resigned to lying on the concrete or maybe to just going home. Something prompted a radical idea to arise. A germ of a thought: maybe I could stake my claim (if indeed I had one). Meekly, I did.

OMG! It worked. I’d stood up for myself (in 8 feet of water) and hadn’t been scoffed at, sworn at, ignored, or … whatever else I’d pictured happening. I was back on my air mattress with my book and a tiny new shred of confidence.

To me that felt brave. It felt like confrontation (yikes!). It involved another person. Call me a late learner (and you’d be right!) but that memory stands as one of my earliest moments of ordinary overcoming. I’d love to have been a braver person throughout my life and still wish that. So, if you have a story of becoming braver, please share it here.